Today would have been Billie Holiday’s 100th birthday. Lady Day had one of the most unique jazz vocal styles ever recorded, and it made her famous enough that she was the first African-American woman ever to sing with a white jazz band. Her recording of the anti-lynching song, “Strange Fruit,” in 1939 makes her important in the history of American race relations during a time period when Jim Crow laws were still commonplace, not just in the South, but across America.

On the basis of this evidence alone, it seems like Holiday would make an excellent candidate for a children’s biography, inspirational as Harriet Tubman or Martin Luther King, Jr. However, Holiday’s life story is difficult to translate to a children’s book. She was raped (or assaulted—accounts differ) at the age of ten, and became a teenage prostitute (in the same brothel where her mother also serviced clients). This makes even the common children’s biography trope of focusing on a famous person’s childhood impossible for a picture book audience. Things did not get better for Holiday as she got older; she became addicted to alcohol and marijuana, and later opiates. Her boyfriends and husbands often abused her and got her or kept her hooked on drugs. She served time in prison because of her addiction, and eventually it led to her death at the age of just 44. Despite all this, her one-of-a-kind voice, her courage in standing against racism, and her place in jazz history all deserve recognition. So what is a children’s biographer to do?

Amy Novesky, author of a picture book biography of Billie Holiday, decided to focus on one of Holiday’s relationships that never let her down: the one with her dog, Mister, a boxer who adored her. Mister and Lady Day: Billie Holiday and the Dog Who Loved Her (2013) includes descriptions of many of the dogs in Holiday’s life, but highlights her relationship with Mister as the dog who was always there, waiting in the wings or guarding her stage room door to keep fans “at a polite distance.” Most importantly, Mister was there waiting for her when “Lady got into trouble” and “had to leave home for a year and a day”—when she was imprisoned for drug possession in 1947. Except in the note at the end of the book, the text does not mention the cause of Holiday’s “trouble,” and this is perhaps appropriate for a picture book audience who may not yet be able to conceptualize the complexities of human behavior. The pictures—which are very appealing, drawn by Vanessa Brantley Newton who also illustrated Cedella Marley’s One Love—unfortunately compound the textual glossing-over of Holiday’s addiction, by portraying her returning from prison in a chic suit, carrying a hat box from a Fifth Avenue shop in New York and with luggage tagged as if it (and Holiday) had been on a pleasurable excursion. Even the message about the unfailing love of a pet is dimmed by the suggestion that any “trouble” Holiday might have had was erased by a little retail therapy. 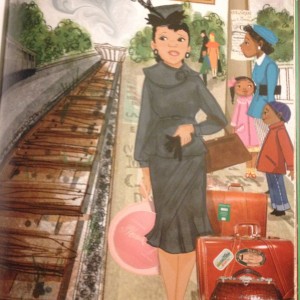 Holiday returns from prison? Or shopping?

Mister and Lady Day is a children’s picture book, and it is therefore unsurprising that it is not a book about drug addiction. But it is a picture book about one of the greatest jazz singers of all time, so it is surprising that the racism that Holiday encountered—and the stand she took against it in her life—plays no part in the book. The short clips of song lyrics included in the book (from “Sugar” and “But Beautiful”) do not express the blues that the text says Holiday was famous for singing. Nor does the book discuss jazz and blues as coming from or rooted in an African American tradition (let alone mention Holiday’s influential “Strange Fruit”). And there is no mention of the racial heckling she faced when touring with Artie Shaw’s band. By discussing Mister and Holiday’s other dogs as her “best friends,” the book is in fact able to avoid difficult discussions of racism in America. Dogs don’t see “race” as an issue; Novesky in this way subtly suggests that neither should we. Dogs don’t hear the blues either; Novesky comments that “the sadness of her songs didn’t matter to Mister.”

But if racism and the blues are removed from Billie Holiday’s story, then so is some of the gravity and magnitude of what she accomplished in her life. She is a well-dressed, dog-loving singer who was nervous about singing at Carnegie Hall—this is all we really learn about Holiday in Novesky’s and Newton’s book. We don’t do child readers any favors by not teaching about racism, and they won’t become racist or self-hating if they do learn about it. Mister and Lady Day tells a pleasant story, but it is a story with an unreal quality because it is neither Holiday’s story nor our story. Our human story is one that includes the strange fruit of racism, but also the individual and collective triumphs over that racism. As in Holiday’s case, many of the most powerful triumphs over racism have been artistic. Holiday had a tragic life, but her voice and her music remain as testaments to the strength she maintained throughout that life. To tell Holiday’s story without mentioning the way that a racially segregated society shaped, shattered, and sharpened her is like telling the story of (Lady) Day without mentioning the Night.