Can’t we all just get along? Boxers in the Ahlbergs’ Happy Families series.

An interesting story appeared in the Daily Express on Sunday about recently-deceased boxing legend Muhammad Ali’s “special relationship” with the UK (http://www.express.co.uk/news/world/676911/Boxing-legend-Muhammad-Ali-Special-relationship-Britain-mutual). In the article, fellow boxer George Foreman is quoted as saying that if Ali “had been born and raised in London, he never would have changed his name” from his birth name of Cassius Clay to Muhammad Ali. Ali changed his name in part due to his religious awakening and in part because his birth name was seen by him as a legacy of slavery, one that he didn’t want attached to him. Foreman argues in the article that Ali would not have needed to change his name because he wouldn’t have experienced the same level of racial prejudice as he did in the US. 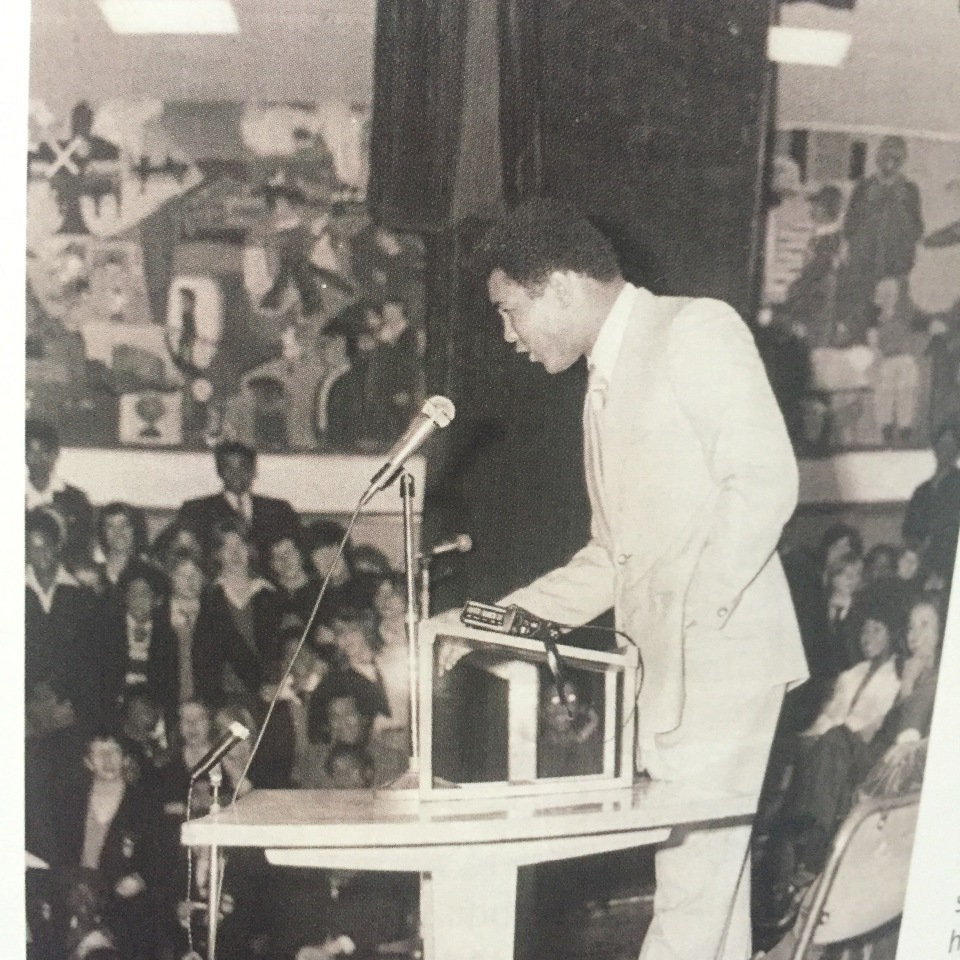 Muhammad Ali at Tulse Hill School in Brixton. Photo from Memoirs of a Black Englishman.

This is perhaps a questionable notion (you’ll note that Foreman was not born and raised in London either, and you might find *one or two* Black Britons who would disagree with his statements), but it is true that Ali liked Britain and felt well-treated by the British. His contact with the British people included school children in Brixton. Ali visited a school in 1974 at the behest of Paul Stephenson, a Black British member of the school’s Board of Governors. Stephenson didn’t like the low expectations that some of the teaching staff had with regard to the Black pupils in the school, and he wanted provide positive Black role models for the students (see Stephenson’s Memoirs of a Black Englishman for more about his efforts) so he asked Ali to come and talk to the students. After that visit, Ali helped Stephenson set up the Muhammad Ali Sports Development Association to develop confidence in Black, Asian and Minority Ethnic pupils through sport.

Ali’s interaction with British schoolchildren and Foreman’s comments about racial prejudice got me thinking about boxing in/and children’s literature. Two very different books sprung to mind, one for the picture book reader and one for the novel reader. They illustrate quite nicely the aspirational and actual attitudes about race in Britain and in British children’s literature. The picture book, by white author-illustrator team Janet and Allan Ahlberg, is part of the “Happy Families” series, Mr Biff the Boxer (1980). The novel, written by Black British author Catherine Johnson, is Hero (2001). 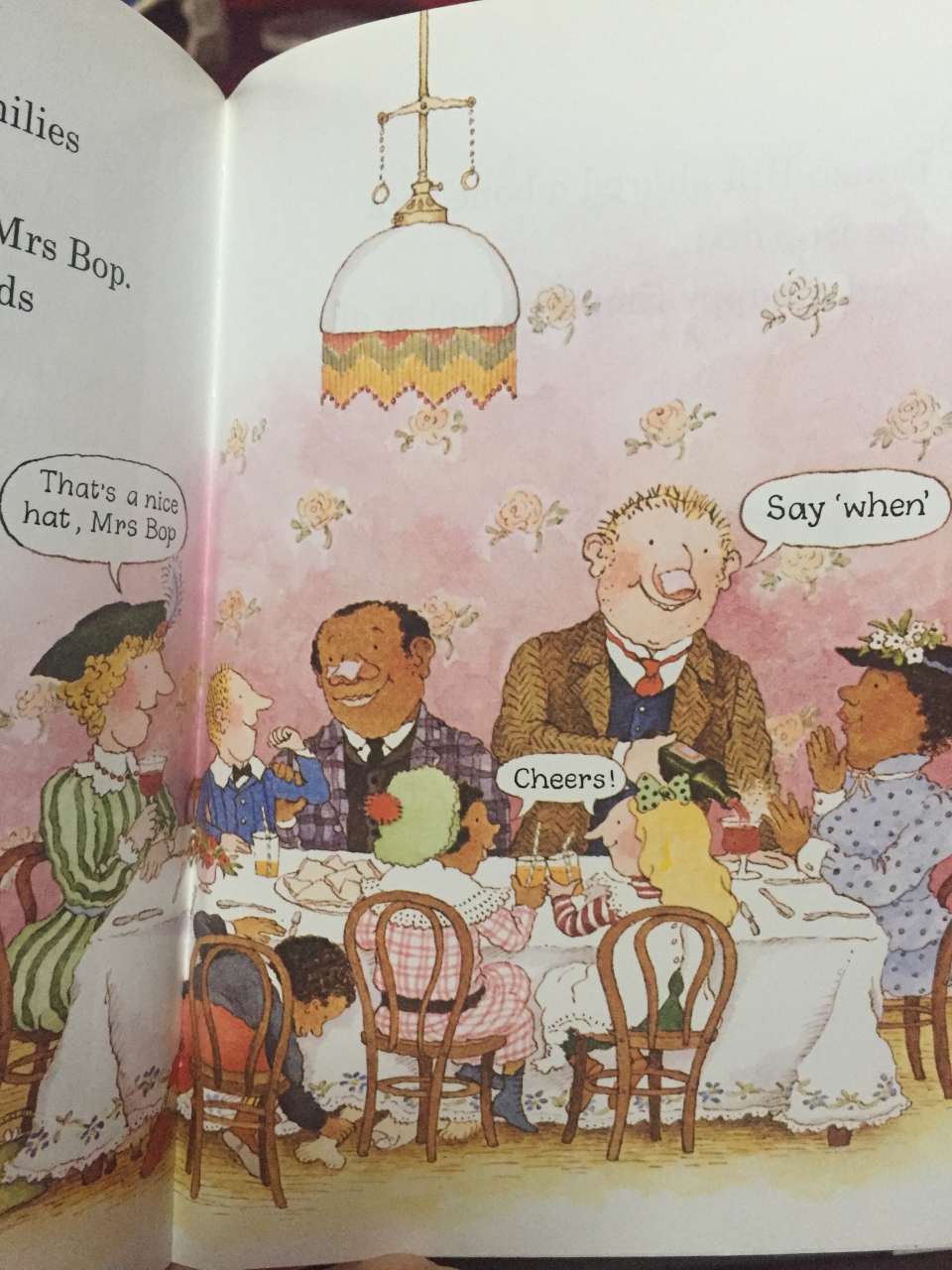 The boxers give up fighting because they have so much in common (but who’s going to pay for dinner now that they’ve made themselves redundant?)

The Ahlbergs’ titular Mr Biff, a white boxer, is meant to face Mr Bop, in a charity fight. The Black Mr Bop, we are told, is “fit as a fiddle . . . the toughest man in town . . . the champion” (n.p.) whereas Mr Biff is lazy and requires his children and his wife to “toughen him up”, which they do by feeding him carrots and banging him on the head. They succeed well enough that the fight between Biff and Bop ends in a draw. The two boxers meet each other in the dressing room and decide that boxing is “silly” because it leaves them feeling sore—so the two families go out to dinner at a restaurant together “And a happy time was had by all” (n.p.). The message of the book is one of, not just happy boxing families, but a happy British family full of racial harmony. Bop is initially seen as a threat who must be fought against, but Biff and Bop soon realize they have more in common than not, and they (literally) break bread together, becoming one big happy family. The Ahlbergs depiction of race here does and does not matter; on the surface it does not matter, but the book would not have the same impact if both fighters were white, for example. The fact that Puffin, who published the series, thought that the multiracial aspect of the Happy Families series was important is indicated by a letter I found in the Seven Stories archive (look and see what the collection holds here: http://www.sevenstories.org.uk/collection), in which the Puffin editor of the time decides not to republish Leila Berg’s multiracial reading books in the Nippers series because Puffin had already committed to Happy Families (the idea that the books were a like-for-like substitute is worthy of an article of its own—but another time). The Ahlbergs’ version of boxing and multiracial Britain is, perhaps, the one that George Foreman saw (or imagined), and certainly the one that many Britons want to believe.

Black British author Catherine Johnson shows a very different version of race and boxing in her novel Hero. Boxing is not about just going to work; it’s about survival and freedom. Set in London in the 18th century, the story concerns the way that Black people were treated in Britain between the abolition of the slave trade and the abolition of slavery. It’s a perilous time, one in which a man can have his pub commandeered by his dead wife’s relatives because they are white and he is Black. Worse, he’s in danger of being sent back to Barbados and slavery. His daughter, Hero faces prejudice and violence when she tries to rescue him and regain their livelihood. Her father’s boxing saved him from slavery in the first place and made his name in London, but it can’t keep him from being sent back. Hero isn’t expected to fight, because she’s a girl, but she won’t let others define her, and uses her fists to make them take back ugly words.

Boxing can only get you so far if you ignore other kinds of knowledge–a sentiment that Ali would approve.

But fists are not enough, and Hero must learn another way of fighting. Her father has been rescued by another group of people who have been fighting with something other than their fists: Black abolitionists who fight with words, in the courts. This move from the physical to the verbal is marked in Hero’s own life as well. At the beginning of the story, she “didn’t want to think about slavery” (6), and disdains her cousin Daniel’s impressive vocabulary; by the end, she realizes that book-learning and the ability to read the law and write a will has saved her father, and she determines to quit fighting and start listening. In the last scene in the novel, she asks her father to tell about his life in Barbados, under slavery. Boxing and a thinking mind are not mutually exclusive in this story; in fact, it takes both to survive. 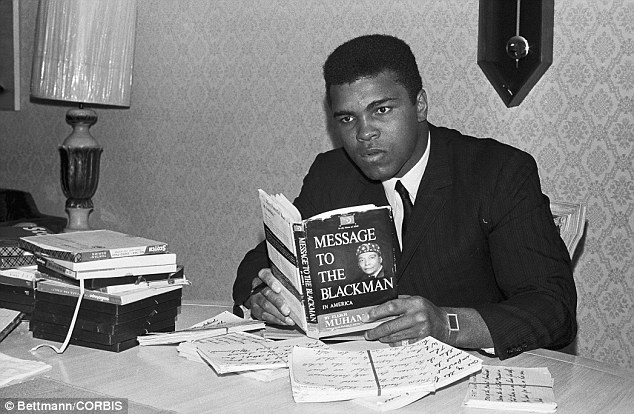 Muhammad Ali once said, “I don’t have to be what you want me to be.” And he certainly didn’t act the part of a happy member of the American family. But he knew enough to realize that being who he wanted to be, and defining himself on his own terms, meant fighting all his life. Sometimes that fight is best fought through action—but other times, it can only be fought in words.