Britain’s empire once expanded all over the world, dominating at its high point one-quarter of the world’s land mass and the lives of one-sixth of its people. After World War II, the (former) imperial traffic went the other way, as Louise Bennett has put it, “people colonizin’/Englan in Reverse” (“Colonization in Reverse”). By 1970, people of Jamaican descent alone numbered 1.4 million of Britain’s population—and a third of those were children born in Britain. Caribbean, Indian, Pakistani, and African people were all among the postwar waves of immigration into Britain. As the new populations of Britons grew up, there was concern among their foreign-born parents that these children would not value or understand their dual heritage. Books to help children focus on their “other” heritage through a recognition of the geographies and histories of empire, began appearing as early as 1972. 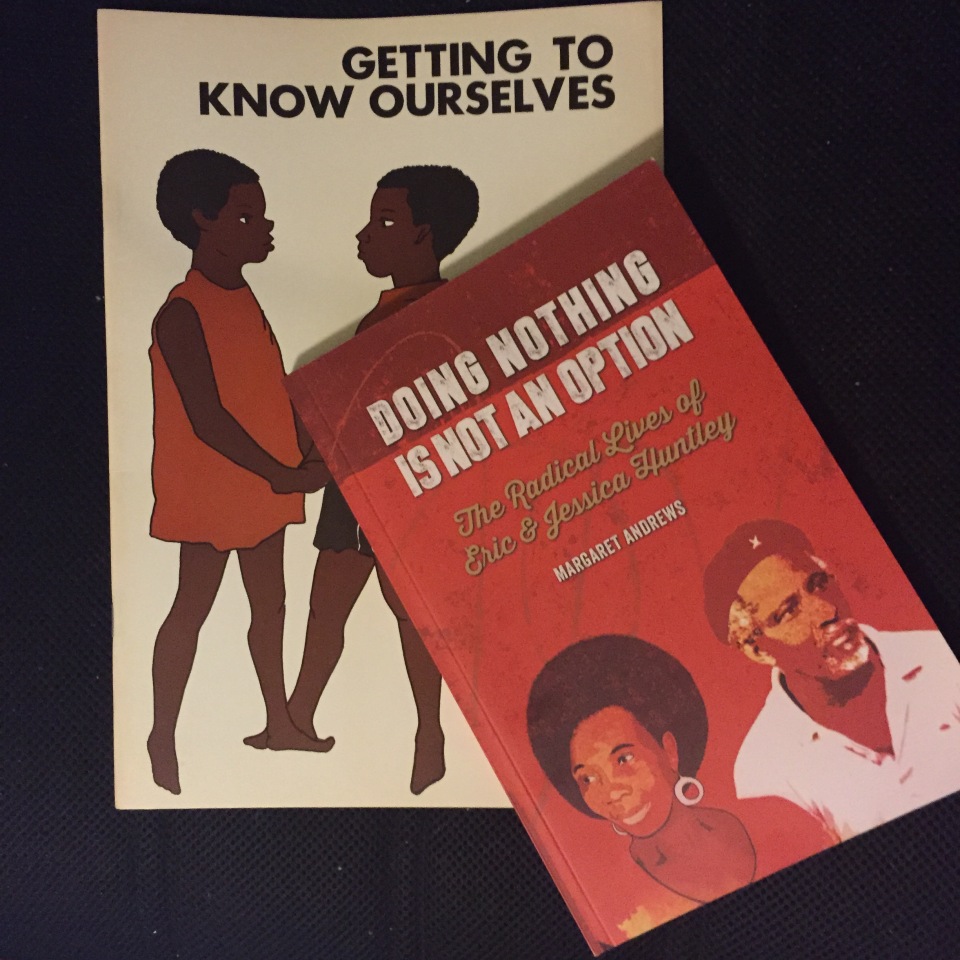 Getting to Know Ourselves by Bernard and Phyllis Coard linked children in the Caribbean to their contemporaries in Africa. The book was published by independent publishers Eric and Jessica Huntley (pictured in front.).

At first, it was independent publishers such as Bogle L’Ouverture Press producing these books. Bogle L’Ouverture, run by Guyanese immigrants Jessica and Eric Huntley, began publishing in the late 1960s to provide access for Black Britons to the writings of political activists such as Walter Rodney, but as their own children began to encounter the white, Eurocentric school system, they expanded their publishing to include children’s books. Their first venture was written by Bernard and Phyllis Coard, Getting to Know Ourselves. Bernard Coard had written his doctoral dissertation on the exploitation of Africa; his wife Phyllis was a clinical psychologist who specialized in the emotional disorders linked to racism. The book they produced for children introduced two children from Jamaica to two children from Africa, and explained why they looked alike. They were linked, the book explains, through a history of slavery. Although the book is indirect about both their enslavers and the horrors of slavery, it does provide child readers with a history that was almost entirely absent from the schools at the time. 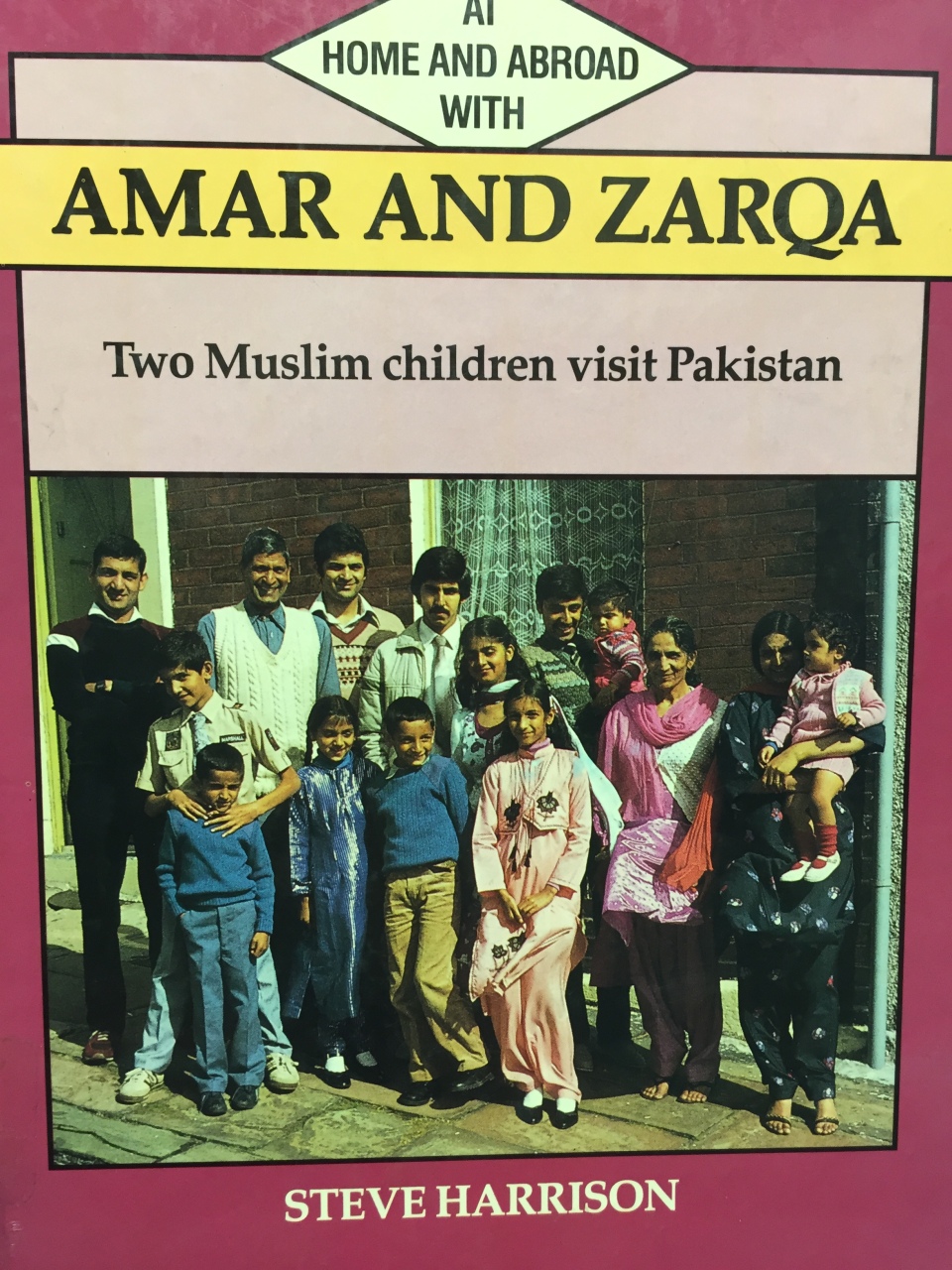 Not quite at the point of saying Two BRITISH children visit Pakistan.

By the late 1980s, more mainstream educational publishers were also producing books for young people that discussed the links between empire in the 19th century and migration in the 20th. Macmillan Education, for example, produced a series called “At Home and Abroad” that addressed South Asian and Caribbean migration to Britain. Steve Harrison’s At Home and Abroad with Amar and Zarqa: Two Muslim Children Visit Pakistan is one of this series. It is very text-heavy, but in part this is because it is trying to, as it were, make up for lost history. The book starts out by explaining, “The children in this book are Amar, a boy of twelve, and Zarqa, a ten-year-old girl. They are British, but they have never met many of their relatives. Their oldest relatives live thousands of kilometres away, in Pakistan. To understand why the members of this family live so far apart we need to look back into history” (4). Harrison then goes on to describe the British Empire, the South Asian contribution to Britain’s WWI and WWII war efforts (“Many people are surprised” by the fact that non-Europeans fought, Harrison says on the same page), the after-effects of independence from the British, and migration. The children visit many places in Pakistan, learning its history but also enjoying its fairs and festivals and seeing the way people in Pakistan lived on a daily basis. Amar and Zarqa enjoy their time, but conclude that they consider themselves British: “I now know that although my home will always be Britain, I’m part of a bigger family that is spread across the world” (47), says Amar, and Zarqa adds, “we’re a part of the village even though our future is in Britain” (47). This series focuses on the heritage that British-born children have outside of Britain.

Patel’s book widens the definition of British to include Top of the Pops and Hindu comics.

Another education series, Franklin Watts’ “When I was Young” books, includes at least one offering that explores the history of migration. Tarun Patel writes about When I Was Young in the Seventies (1991). Unlike Amar and Zarqa, Patel was born outside the UK, coming to Britain in 1972 from Kampala, Uganda, after Idi Amin expelled all the Asians in the country. This rarely-discussed (in children’s books, anyway) forced migration shaped Patel’s life. Because the Ugandan government made them leave within 72 hours, “and the soldiers made sure you weren’t taking any valuables . . . We were poor when we arrived in London” (6). Patel knew no English, when he and his family arrived, and he describes learning the language from British children’s television. Thus, Patel was both part of and separate from British culture at the same time. He experiences racism from skinheads, who “called all the Asian kids ‘Paki’” (16) but also learned about strikes during the Thatcher era. He watched “Top of the Pops”—Bay City Rollers was a favorite—but also watches Hindi films. “I couldn’t understand the dialogue,” he says, “but I loved the fight scenes and the songs” (19). In a reverse of his education in British culture, he also has to learn about Hindu culture—but he does this through comic books as well as going to temple. Like Amar and Zarqa, however, Patel sees his future in the UK: “I’d really like to go into hotel development here and in Europe, that’s my ambition at the moment” (26). The book focuses on Patel in Britain, but describes his links with his Hindu heritage and the history of empire as well.

Kamal learns about steel bands instead of the Empire in Frederick’s book.

This is a continuing story. In 2006, the independent, multicultural-focused publisher Frances Lincoln produced a series called “Children Return to their Roots”. The series included Malcolm Frederick’s and Prodeepta Das’ Kamal Goes to Trinidad. This book, which I’ve written about before (see “My (Black) Britain: The West Indies and Britain in Twenty-First Century Nonfiction Picture Books,” Bookbird 50.3: 1-11), is similar to the “At Home and Abroad” series, except that it shows a country much further beyond independence. Thus, the Trinidadians are connected in the text to the world, but not as specifically to Britain as Pakistan was in Harrison’s text. Kamal Goes to Trinidad shows a British child learning about his roots; he visits Trinidad because his grandparents live there, but he lives in Britain because the British were everywhere.

Thanks as always to Seven Stories for access to their book collection; they own the copies of the Coards, Harrison, and Patel texts.