A couple of weeks ago, I was visiting friends in Wales. They live in a part of Wales where Welsh is regularly taught and spoken, and they are learning Welsh, so we went to a Welsh shop in the market while I was there. Now, I lived in Cardiff for a couple of years, but (at least at the time) Welsh was unnecessary, so my vocabulary extends only as far as “iechyd da” (cheers!), “diolch” (thank you), “nos da, cariad” (good night, sweetheart), and “dim parcio” (no parking). Nonetheless, when I saw the following book, I thought I had a pretty good idea what it was about. 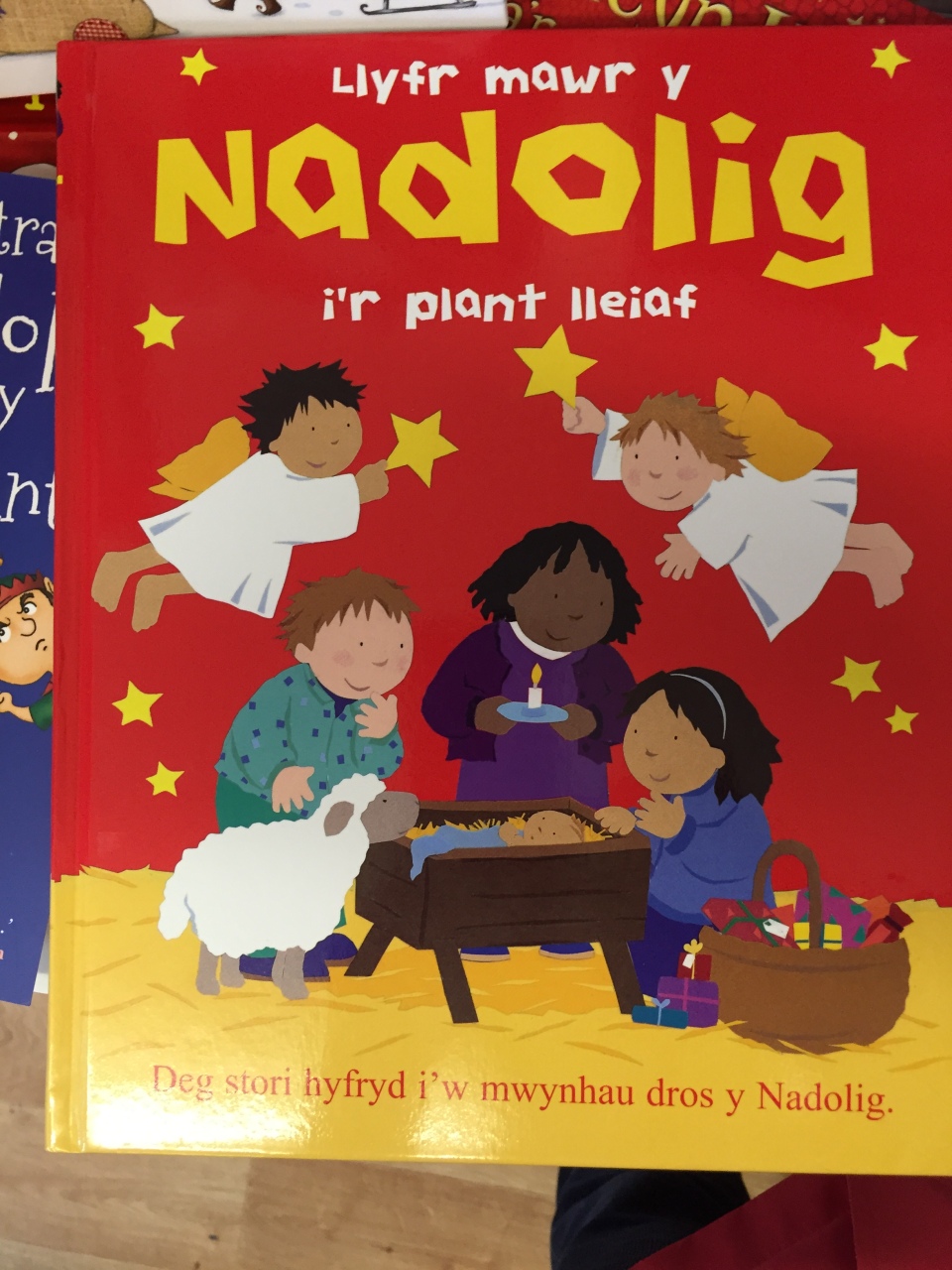 I was very excited, because I recognized the illustrator, Alex Ayliffe, whose pictures I like very much, and because it was a deliberately casual depiction of the Nativity as a multicultural scene. For centuries, there have been depictions of the Nativity scene in books for children as EITHER a white family with white visitors (except for one or possibly two of the kings) OR a nonwhite family with nonwhite visitors. Elizabeth Laird’s The Road to Bethlehem, for example, uses pictures from a medieval manuscript showing an Ethiopian version of the Nativity. The pictures are lovely, but Laird’s purpose is partly to indicate how far back the idea of a Black Jesus goes.

A medieval Ethiopian Christmas story, repackaged for a child audience.

In any case, I determined to look up Ayliffe’s version of the Nativity in English and buy a copy for my collection. So imagine my surprise when I googled “Ayliffe” and “nativity” and this is what appeared:

What happened to the diversity?

Did diversity only exist in Wales? It seemed improbable. So I kept looking and then I realized the misunderstanding caused by my lack of Welsh. The book that I saw was not a book of the First Christmas. It was a book of a Nativity Play. 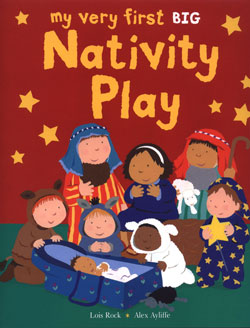 Diversity explained: It’s not the Nativity, it’s a nativity play.

Being American, I did not grow up with Nativity plays in school; we had nonreligious Christmas singalongs and made Rudolphs out of clothespins and red pompoms and gave plays with titles like “The Night it Rained Toys” (I was the female lead of this production, a queen with a costume change, in the days when the ability to learn lines was more important than how one looked). It is true that one year we did Menotti’s opera “Amahl and the Night Visitors,” but it was understood that this was a one-off affair because of Jackie Eastman, who even at the age of ten could sing well enough to (almost) make up for the rest of us. So when I came to Cardiff, I remember being surprised that some child-friends of mine were in a Nativity play on the last day of school.

“I didn’t know they went to a religious school,” I said to their mother.

She looked at me, puzzled. “They don’t,” she said, “every school has a Nativity play.”

“But what about the Jewish kids? Or the Hindu kids?” I persisted, in my separation-of-church-and-state mindset.

“They’re allowed to be in it too.”

There are certainly many schools in Britain now where they don’t do a Nativity play, but it remains a common occurrence this time of year. And the media does its best to support this activity by interviewing non-Christian (and predominantly non-white) parents pleased over their child’s ability to participate in this “British institution”. This media push includes children’s literature, which for decades has seen the school Nativity play as a way to integrate non-Christians into British (Christian) society. 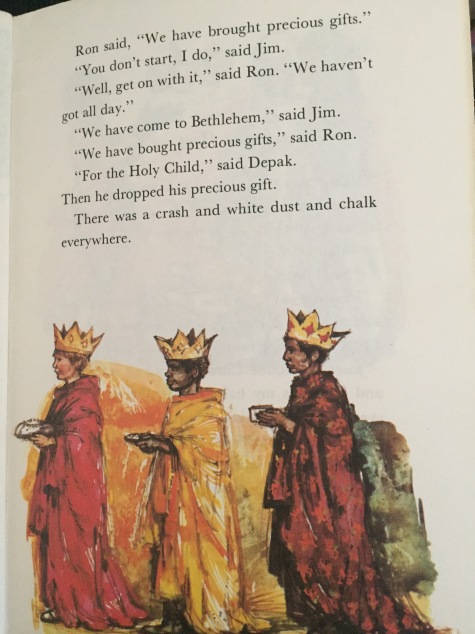 Geraldine Kaye’s Eight Days to Christmas shows a novel, but limited, use of diversity in the school play.

Take Geraldine Kaye’s contribution to Leila Berg’s Nippers series, Eight Days to Christmas (1970, above). Illustrated by Shirley Hughes, the story tells of Miss Lee’s class who are doing “a play” (the text never uses the word “nativity”) for “the visitors” eight days before Christmas. The class is diverse, but there is no discussion of whether or not children with names like Deepak or Devi should be doing a Christian story. Typically, for 1970, although everyone participates, the main family (Mary, Joseph, and even the baby-doll Jesus provided by the Black narrator of the story, June) is white. Non-white participants are angels or kings, and the white king leads the procession to the manger. Eight Days to Christmas is unusual for its time, in that it portrays (what was presumably becoming more common at the time) nonwhite participants in the Nativity play, but they only had supporting roles.

This is generally the pattern of books that depict nativity plays, although now many use photographic illustrations instead of drawn. This is from a series entitled “Special Days”—one which includes Mother’s Day and Poppy Day—which does include a multiracial family, including a Black baby doll for Jesus, but this is the exception rather than the rule.

Who is the Nativity play for? Maybe not for these bored (but diverse!) looking kids.

In the end, depictions of British school nativity plays seem to be offering a message. That message isn’t really about Christianity; last week a report suggested that not only is Christianity declining, over half of Britons do not identify with any religion at all (http://www.bbc.co.uk/news/uk-35029924). Instead, British nativity plays in schools are about tradition, and including everyone who lives in Britain as part of that tradition. And this is, I think, mostly a good thing (although the American in me says you could do this just as well with Father Christmas as with a nativity play). But it also makes me wonder: if the nativity PLAY as depicted in books is about inclusiveness, and saying that everyone has a share in British tradition, then why did Alex Ayliffe need to illustrate two different versions of the Christmas story?