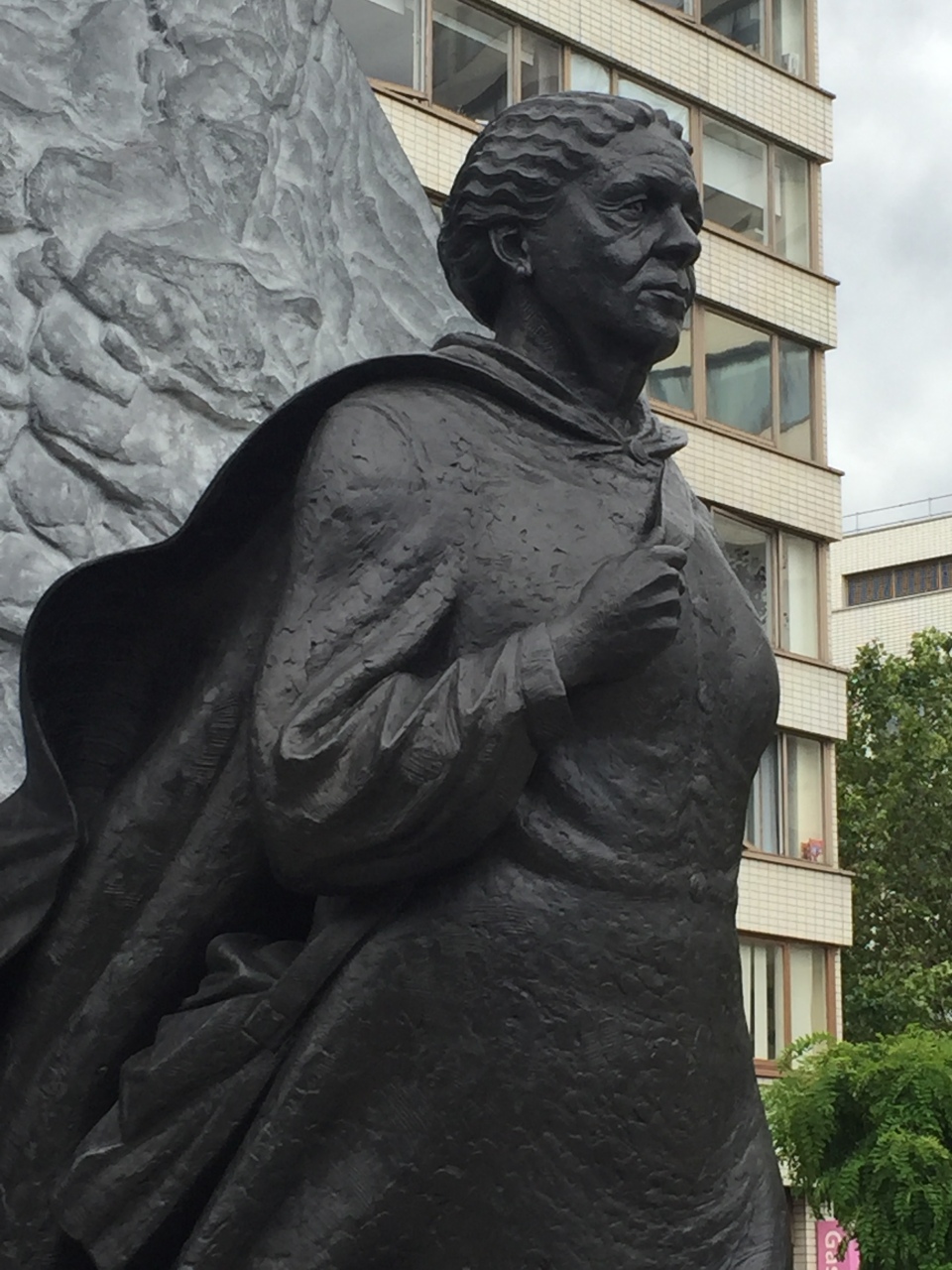 Harewood’s ITV programme celebrates the new statue of Mary Seacole in London–but not everyone is pleased.

This week, Britain’s ITV showed a programme on Mary Seacole entitled “In the Shadow of Mary Seacole.” In some ways, the programme could have been titled, “Mary Seacole in the Shadow of British Racism.” Many people who initially celebrated the fact that ITV was telling the story of the woman labeled “The Greatest Black Briton” in 2004 were dismayed to find that the programme was put on the schedule at 10:40 pm. Others complained that the programme focused on the opinions of white historians. Indeed, it seemed that most, though not all, of Seacole’s defenders in the programme were non-historians: actors, comedians, nurses. Unfortunately, none of this is new when it comes to Mary Seacole—and children’s books about the Jamaican Crimean War nurse are no exception. 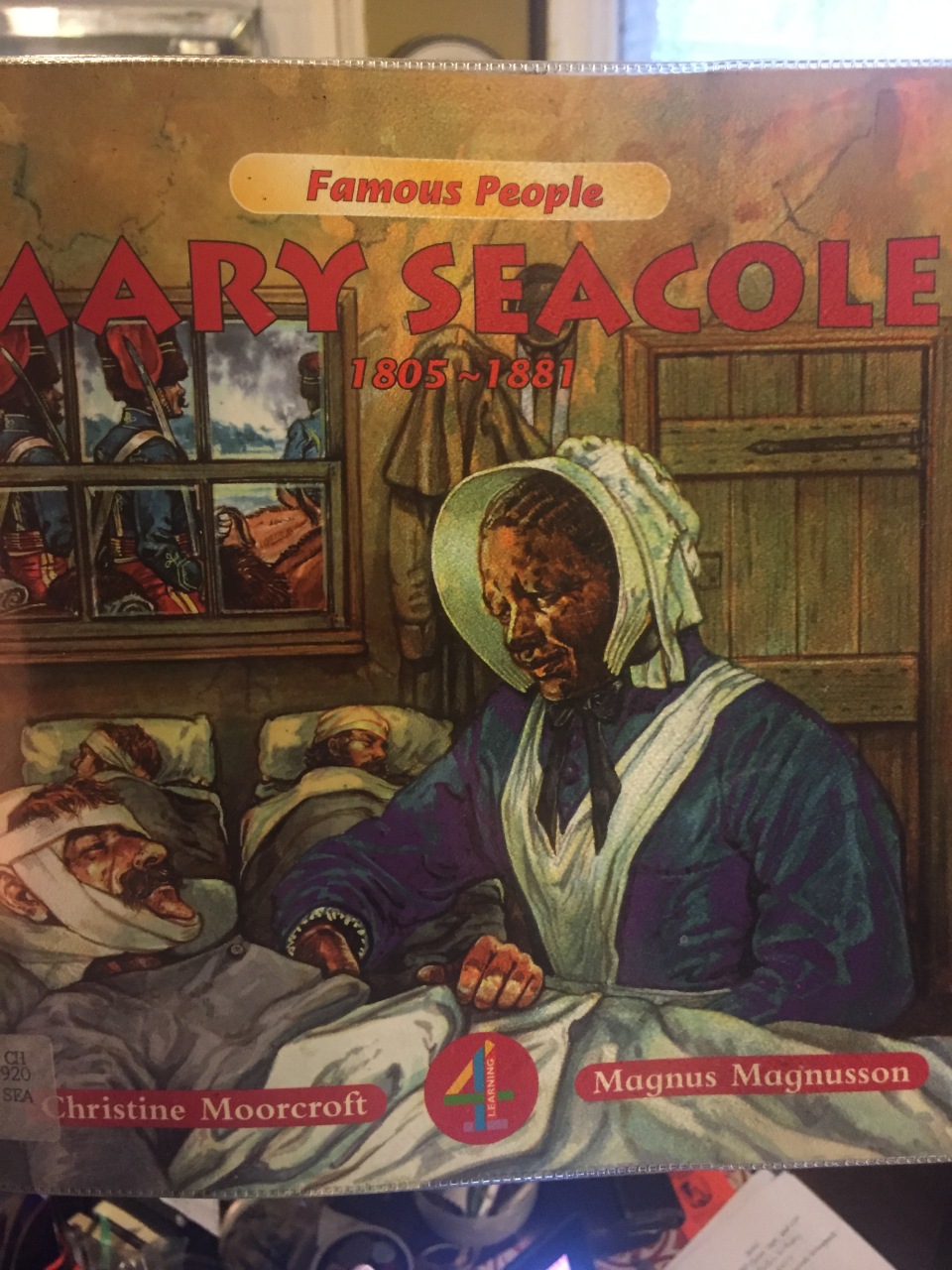 You have two minutes for questions on . . . Mary Seacole: the biography with Mastermind presenter Magnus Magnusson listed as author.

I’ve written in various places about Mary Seacole before (see my article in Bookbird, for example, “My (Black) Britain”) so rather than rehash what I’ve previously written, I want to focus on a particular children’s biography that caught my eye. Its title is fairly unremarkable, Famous People: Mary Seacole 1805-1881, but what led me to order it last year was one of the listed authors. Christine Moorcroft—who I presume is the main author of the book—shares author credit with Magnus Magnusson. British readers of this blog will know Magnusson’s name as the original presenter of the long-running quiz show Mastermind; I was curious about his involvement in a book about Mary Seacole (as an Icelandic citizen all his life, I doubted Mary Seacole was his “specialist subject”). When the book came, I understood. Prominently on the front of the book, in between the authors’ names, is a multicoloured number “4”. The book was written as part of a Channel Four Schools project that combined short videos (still available here: https://shop.channel4learning.com/?page=shop&cid=8&pid=1603 although this is not an endorsement since I haven’t seen them yet—just in case you are interested) with books and related classroom materials. Other people profiled in the series include Cleopatra, Boudica and Gandhi, so the series clearly had a commitment to a broad range of historical figures from within and without Britain.

But although the series is committed to “historical evidence” “to show that the story is true” (both these quotations come from the promotional blurb on the website listed above), the book version of the biography is hampered by its use as an educational tool and its desire not to alienate a white British audience into some rather strange versions of historical accuracy. Factually, it often allows untruths for the sake of its audience; Mary Seacole’s mother “married a Scottish officer” (6), something for which there is no evidence and which overall historical patterns would suggest was unlikely. In children’s books, however, parents are still supposed to be legally married, and the complicated relations between Black and white people in the Caribbean were perhaps a bridge too far for this book. Later, when Seacole goes to London, “She was called names by other children because she was black. Nonetheless, she went back to London many times” (8). Racism can’t be that bad if she keeps going back—can it?

Children in London might call racist names, but the text exonerates specific British adults from any racism against Seacole. It mostly does this through the use of passive voice. Seacole goes to London to join Florence Nightingale’s nurses and is rejected—but not by anyone in particular, and not necessarily because she was Black: “Mary was told that no more nurses were needed” (11). When she eventually gets to the Crimea, and to Nightingale’s unit, “Mary went to see her and was given a bed for the night” (13). Nothing is said in the rest of the text that even hints of racism, and the book ends quite happily: “Mary was famous when she arrived in London. People had read about her in the newspapers. She was the guest of honour at a dinner with the army. The soldiers cheered her” (19). The book never calls out British officials or Florence Nightingale for racist attitudes, and lessens the impact of Seacole’s heroism by avoiding the real struggles she went through to be accepted.

Right to be skeptical? A still from the deleted CBBC episode of Horrible Histories.

Moorcroft and Magnusson’s reluctance to talk about British racism is a justifiable attitude—if you look at what happened when other accounts of Seacole’s life tried to depict this racism. Terry Deary’s Horrible Histories book series generally avoids discussions of racism (there’s no Horrible Histories: Rude Racists, for example), but when the television sketch show based on his books did a segment on Nightingale and Seacole where both women were jostling each other over who would get the attention of a PR agent, the show received official complaints for appearing to criticize Florence Nightingale’s attitude toward Seacole. The complaint was upheld, and the segment is no longer available to watch (http://www.dailymail.co.uk/news/article-2775315/BBC-criticised-implying-Florence-Nightingale-racist-children-s-Horrible-Histories.html). One of the people who complained was Professor Lynn McDonald, a member of the Florence Nightingale Society. McDonald, and the Florence Nightingale Society, regularly write letters and newspaper articles criticizing various forms of media for their portrayal of Seacole.

Which brings me back to presenter David Harewood and ITV’s programme, “In the Shadow of Mary Seacole”. One of the people interviewed by Harewood was Mark Bostridge, who wrote a biography of Nightingale—and who is also a member of the Florence Nightingale Society. He calls the “myth” of Mary Seacole “faking history at its worst” (“In the Shadow” 1.24). This claim is left alone, being countered with a response about the caring concern of Seacole. I’m not arguing that Seacole was not caring, but by not putting Bostridge’s claims next to one of the other people in the programme who talk about the kind of medicine that Seacole practiced, the show appears to accept that Seacole was, as Harewood says directly after Bostridge’s comments, “medically unqualified” (1.36). Imagine if Nightingale was portrayed as learning her nursing skills from a group of religious zealots in only four months (she did her training with Lutheran “deaconesses” and only spent a short time with them): would we still look at her as the heroine she has become? How we describe people matters, and it matters especially in books and media for children. We should never teach children to passively accept a power hierarchy—like Mary Seacole, we should constantly challenge it.