In March, I was talking with a friend about musicals, and I said I liked West Side Story.  “Do you?” my friend asked, clearly surprised.  I do like the music, and the dancing, and I have particularly fond memories of the song “Rumble” which my daughter’s nursery school class used to put on when it was clean-up time, which I always thought was funny (was it some kind of social conditioning to associate in their small minds gang warfare with wanting to clean up the house?).  But I’m pretty sure my friend was thinking of the film, which has faced considerable criticism from its premiere in 1961.  “Well,” I said, “I like Rita Moreno.” 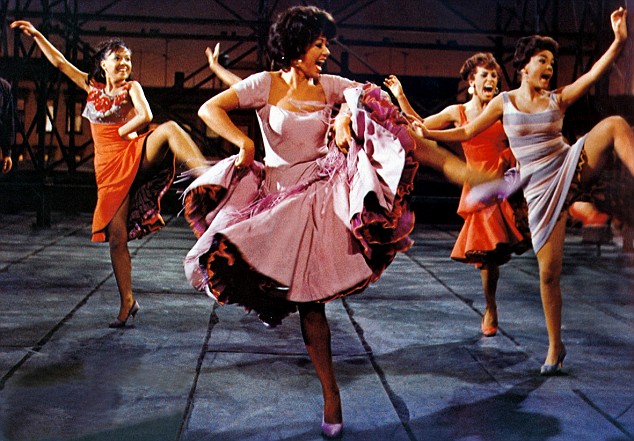 I thought of this last week when BBC Radio 4’s PM programme ran a piece on West Side Story, in which Carolyn Quinn commented that the film version was criticized for having “Americans” play Puerto Ricans (https://www.bbc.co.uk/programmes/b09zt3k1 about 41 minutes in to the programme).  I immediately thought of the line from the song, “I Want to Live in America” in which the Puerto Rican girls point out, “Puerto Rico’s in America.”  Quinn’s definition of “American” points up the difficult relationship between the United States and its island territory, and also speaks to the definition of “American”; surely the word Quinn was looking for was “white”—she didn’t mean that Sidney Poitier was playing a Puerto Rican.  Americans are white; people of colour are African-American, Latina/o-American, Puerto Rican American.  And Puerto Ricans almost never count as Americans.  We saw this come into sharpest focus following Hurricane Maria, when the president complained about helping Puerto Ricans recover (https://www.usatoday.com/story/news/politics/2017/10/03/trump-puerto-rico-survey-hurricane-maria-damage/726352001/) because it was costing too much.  A set of austerity measures has since been put in place by the federal government, which today, 1st May, Puerto Rican unions are protesting in a one-day strike (https://www.npr.org/2018/05/01/607303533/demonstrators-to-march-in-puerto-rico-to-protest-austerity-measures).

Books such as Ramy Allison White’s Sunny Boy on the Ocean depict happy blonde children frolicking in Puerto Rico while the “natives” seem happy to serve them.

But the fraught relationship between the mainland US and Puerto Rico does not just go back to the 1960s.  It goes back much further, and evidence for this can be found in children’s books.  Puerto (or Porto, as it was once, incorrectly, spelled in American children’s books) Rico began appearing as a setting for children’s books in the US in the very late 19th century because it was ceded by Spain to the United States following the Spanish-American War.  Children’s books have always been a way to encourage imperial exploration, and books such as Young Hunters In Porto Rico (1900) proclaimed the benefits of the island to mainland Americans: “This new island of ours is but little known to the majority of us, but when its picturesqueness, and its mild climate, become a matter of publicity, Porto Rico is bound to become the Mecca for thousands of American tourists in search of health and pleasure” (from the preface by “Captain Ralph Bonehill,” iv; Bonehill was a pseudonym for the founder of the Stratemeyer Syndicate, Edward Stratemeyer).  By the 1920s the predicted discovery had come to pass; Ramy Allison White’s Sunny Boy on the Ocean (1925) has its six-year-old protagonist touring around the island, learning facts such as “San Juan was the oldest possession of the United States” (169).  Puerto Rico is a “possession” that “Americans” can use to make money and enjoy the sunshine in temporary trips, according to children’s literature of the time.  Interaction with Puerto Ricans is kept to a minimum, especially since “natives” are generally depicted as lazy and unclean, if not dangerous.  (For more on early depictions, see my article, “The Stratemeyer Chums Have Fun in the Caribbean” in Internationalism in Children’s Series, Palgrave Macmillan 2014: 59-75).

Twins Rommie and Rovie, in Evelyn Canfield’s 1957 novel, see Puerto Rico, but always at an emotional distance from the land both “foreign” and “American”.

The confusion between Puerto Rico as a foreign land and as a part of America continued in children’s literature throughout the second half of the twentieth century.  Evelyn Canfield’s Rommie and Rovie in the West Indies (1957) discusses the mainland American protagonists’ excitement at “a vacation that was to bring so many foreign scenes, strange foods, and new friends” (14) but points out only a few pages later that “Puerto Rico . . . belonged to the United States, so the natives here are all American citizens” (23).  Most geography texts, such as Michael Burgan’s Puerto Rico (2003), emphasize Puerto Rico’s connection to America (Burgan’s book is in the “From Sea to Shining Sea” series from Children’s Press, which has one book for every part of the United States) but whereas Burgan’s book opens with this relationship, many others do not.  A True Book: Puerto Rico, by Elaine Landau and also from Children’s Press (1999) chooses to begin with asking readers to “Close your eyes and picture a beautiful island with sandy beaches and brightly colored flowers” (5) in a section called “Island of Enchantment”.  It only mentions the political situation some pages later, in the book’s shortest chapter.

Puerto Ricans writing about Puerto Ricans, such as Sonia Manzano, tell a very different story of connection between the island and the mainstream.

In the late 1990s, Puerto Rican-born New York City librarian Pura Belpré began writing about Puerto Rican experiences in colonial times and advocating for more literature about Puerto Rico to be produced.  The establishment in 1996 of the Pura Belpré award has done a lot to bring to light the complicated relationship between the island and the mainland.  The award, which is “presented to a Latino/Latina writer and illustrator whose work best portrays, affirms, and celebrates the Latino cultural experience in an outstanding work of literature for children and youth” (http://www.ala.org/alsc/awardsgrants/bookmedia/belpremedal/belpreabout), has brought Latina/Latino children’s literature closer to the mainstream.  Authors like Sonia Manzano (who, like Rita Moreno, I knew from childhood through PBS children’s television—Sesame Street in Manzano’s case and Electric Company in Moreno’s) showcase Puerto Ricans living in both island and mainland.  Manzano’s The Revolution of Evelyn Serrano was a Belpré honor book in 2013.  In it, Evelyn examines her heritage—as American, Puerto Rican, and Nuyorican.  After discussing the various ethnic groups that make up Puerto Rico, Evelyn comments about her own life in New York City: “us kids wanted to call ourselves Nuyoricans so we wouldn’t have to go through the whole speech of, well I was born here but my parents are from Puerto Rico so I’m really Puerto Rican but born in New York, blah, blah, blah, blah, every time somebody asked us what we were” (188).  “Nuyorican” is one way to remind people that Puerto Rico’s in America—and it’s a message that more children need to hear.