This week’s blog comes once again out of my work in the Seven Stories Archive in Newcastle. Their book collection includes a wide-ranging and invariably random (as it relies on donations) collection of children’s magazines, from the traditional Boys’ Own Annual and some missionary magazines from the 19th century, to Dandy and The Beano from the 20th century. Although I’ll undoubtedly go back to these magazines at a later point, I spent my research time paging through magazines for younger readers. This is a genre that, even in the mostly-ignored area of children’s magazine studies, is generally left unconsidered. I am guessing this is from a combination of two factors—one, generally magazines for young readers are considered to be too simple and/or bland to be of much research use; and two, unlike their counterparts for older readers, magazines for younger readers are generally colored, cut up for scraps, or torn out of use to the researcher. However, Seven Stories has managed to preserve some of these magazines (not all of them, mind you, without some coloring or missing pictures here and there) and I’m going to look at two British magazines, about forty years apart, designed for the 5-9 age range, Fairyland Tales from the 1920s and Pippin from the 1960s.

Fairyland Tales goes non-stop into the future–with Golly in the most precarious of positions . . .

Fairyland Tales, despite its name, did not rely on fairy stories for its content; instead, it was a fairly standard (for the 1920s) mix of short stories, puzzles, poetry and regularly-featured comic strips. Most of the stories were domestic (magazines since the 19th century Chatterbox used stories based in the home, and less often school, for younger readers), but one of the stories, in the 21st February 1925 edition, takes children to colonial Africa. “Jungle Chums” has twins visiting their photographer father who “took pictures of the wild people of the jungle and sent them home” (the pictures, presumably, not the wild people) and the twins are very excited to see, as Bobby the boy twin puts it, “real negroes—the wild kind, I mean; not like the ones we saw at Mombasa dressed in white people’s clothes, and they’ve got great big spears.”

“Jungle Chums” aligns ideologically with two of the regularly-featured comics in Fairyland Tales that also took children beyond the borders of the home, and indeed beyond the borders of the nation. “Jenny and Jimmy’s Jolly Adventures” detail the travails of two pith-helmeted white English children who are connected with a circus that travels the world. Circus life in and of itself allows the children to encounter the “Other”; their “trainer” (presumably for the animals, rather than Jenny and Jimmy) is an African or Afro-Caribbean named Rastus.

Jenny and Jimmy look on while Rastus and some “Arabs” do the heavy lifting.

However, in addition to their own internal Other, Jenny and Jimmy’s travels take them all over the world. They must run from most of these encounters; Chinese sailors try to mutiny Jenny and Jimmy’s ship, and an enraged Sultan imprisons the children when they show the wrong film (the film they showed made fun of the Sultan). Ultimately, the world outside England is full of slightly mad people, but they make life for Jenny and Jimmy jolly, rather than dangerous. The other regular comic feature in Fairyland Tales is the ironically named “Sammy Snowball’s Funny Tricks”—ironic because Sammy Snowball is a black caricature, and also because there are few tricks and they are rarely funny. Given how the white authors treat Sammy Snowball, it is no wonder he complains, in one episode, of being turned a “beastly white”.

It is surprising, given the imperialistic attitudes of Fairyland Tales, to see how much had changed in just 40 years. Pippin, the other magazine for young readers that I examined, existed in an entirely different world from Fairyland Tales. For one thing, it was a magazine subtitled “the Coloured Picture Weekly for the Very Young Viewer” and published by TV publications limited. Many of the features (I couldn’t tell whether ALL of them) were based around television shows such as Camberwick Green and Trumpton. Like its earlier predecessor, Pippin is largely domestic in its setting, but British life had changed dramatically since the 1920s. An influx of migrants from the Caribbean after World War II had literally changed the face of the UK, and this is reflected in one of the features in Pippin, the serial story of a little boy called “Joe”, the first episode of which I found in the 3rd June 1967 Pippin. Joe’s parents run a truck-stop café, and one of their employees (seemingly their only employee) is a Black British teenager named Abel. Abel is pleasant, enjoys playing with and helping Joe when he’s not acting as grill cook, and drives a motorbike.

Never too busy to help: Joe and Abel have a friendly relationship.

“Joe” is a generally lovely comic, especially given the dearth of British depictions of Black Britain in white-authored literature for small children at the time. But it is not entirely free from stereotypes either. Abel prefaces nearly every speech he makes with the exclamation, “Man,” as in, “Man, it’s hot.” Nobody else in the comic has a similar verbal tic, suggesting that it is an attempt by the author (who, by the way, is never listed) to mark Abel out as different. It’s not necessarily a bad difference, but it is noticeable. Worse, though, is the “Topsy” episode, where Joe’s mother comes in from a windy day outside with crazy-looking hair, and Joe compares her hair to that of his golliwog doll named Topsy while Abel looks on in the background. 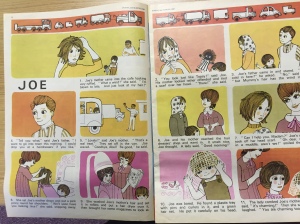 Gone with the Wind: Even progressive comics can slip back into stereotype.

Joe’s mother is “offended” by Joe’s comment, and ties a scarf around her head until she can get to the hairdresser’s. I guess that, even in the more progressive 1960s, white Britons didn’t want to be too closely associated with the “wild kind” of the Other.