In 19th and early 20th century children’s literature, the multiracial character generally evoked one of two responses: fear, or pity. Tom Sawyer’s Injun Joe, for example, was much feared by Tom and his gang, Tom even having nightmares about the character coming to get him. In Caddie Woodlawn, the children of an Indian mother and white father are “half savage” and the recipient of Caddie’s attempts to “civilize” them by paying for new clothes. Other examples can be found in British Empire literature—the “ugly mulatto” being a stock character of fear in books by G.A. Henty, H. Rider Haggard, and others; and the pitiable female “half-breed” or “mulatto” who cannot ultimately be saved by the white hero also figures in the works of these authors.

After World War II, as civil rights in the US and changing immigration patterns in Britain meant increasing, often hostile, interaction between racial groups, the multiracial character in children’s literature nearly disappeared for a time. But a generation later, many things had changed. More and more children were born who had parents of different races, but it was unclear where they would fit in to a post-civil rights society. Both American and British authors produced books dealing with this issue, but for this blog, I’m just going to look at two from Britain: Anthony Masters’ Streetwise (London: Methuen, 1987), and Jacqueline Roy’s Soul Daddy (London: Collins, 1990).

That these two books appeared at roughly the same moment is not an accident. During Margaret Thatcher’s prime ministership, race relations between white Britons and a new generation of born-and-bred Britons with Afro- and Indo-Caribbean ancestry were at a low point. Particularly in terms of relations between the (mostly white) London Metropolitan Police, who Thatcher had empowered with the revival of the “sus” laws, and the Black British community, tensions were high. Governmental reports had called for a focus in the schools on “multiculturalism” but most people felt that the emphasis was token at best, and assimilationist at worst. The multiracial character in children’s books at this time was employed—by both Black and White authors—as the receptacle for British fears and hopes about the possibilities of racial harmony in the country.

This is a story about race? Illustration by David Legge.

Streetwise’s author, Anthony Masters, is a white English writer of action-driven fiction for boys. The central character of this book, Sam, is a white English boy who finds out that his policeman father, killed under mysterious circumstances, had another family—with a black woman. This has been kept secret for a long time, because although everyone (including Sam’s grandmother and mother) think that the other woman is a nice person, if it was found out on the force that a white police officer had a child with a black woman, it would “stir up trouble” (23). Sam is uncertain about his new-found multiracial half-brother. Additionally, he is disturbed by dreams of a person he calls “Albino Man,” a local man who owns an old and crumbling cinema. Albino Man’s primary fearful characteristic seems to be his lack of color where color should be. Sam must confront these fears that center on race. Albino Man holds the key to finding his father’s killer. Once the secret comes out, it is Sam and his mother who are in danger, and Sam’s half-brother Winston rescues Sam’s mother from a fire set by the killers. In the rescue process, Sam’s mother’s face became “black—black like Winston” (116). Of course black skin and charred skin are not the same at all, but the implausible plot and descriptions aside, this is a story about fear of not knowing how to categorize someone racially; either they are supposed to be black but look white (or vice versa), or they are a white boy’s brother but they look black. Sam learns that his very survival means accepting people despite how “different” they may look from him.

You’ve got to have soul to be a whole person.

Soul Daddy, written only a few years later, has a multiracial author in Roy and a multiracial main character, a twin named Hannah who (like Sam) finds out that her father had another family with another woman. Hannah has grown up with her white mother, but her black father has returned to the house with his daughter who is only slightly younger than Hannah. Hannah has difficulty reconciling the change in her household, in part because her black half-sister brings disturbing ideas to Hannah’s world. Nicola questions why they have to live in the all-white suburbs, reads books by black authors, and speaks up in class about the need to include black history in the curriculum. Hannah runs away, but ends up in Brixton, where her father’s parents live. She suddenly “felt I belonged” (222) and can return home where to successfully integrate her black and white halves. Like Streetwise, the message of Soul Daddy is that integration is the way forward, although Roy’s version sweeps wider and urges the school systems as well as individual families to change: “Once, they’d spit on you in the street, but now the hostility was taking a less visible, more secret form . . . It was present in an education system which suppressed black history and achievement and denied black ability to learn” (134). Most people, Roy argues, “pretended it [discrimination] didn’t exist and that Britain was a multicultural society” (134). Both her book and Anthony Masters’ book reflect a still-racially divided Britain, and the hope that integration of black and white together (particularly in the form of the multiracial character) could unite and ultimately save Britain and the British people.

The multiracial character in the 1980s and 1990s was invested with responsibility for society’s problems, but also for possible solutions to these problems. Institutions in these books, such as education and law enforcement, are unable to deal with the “other” and only the character with the ability to function in either racial “camp” can hope to bring about harmony. But the emphasis on individual responsibility for racial harmony would be tested as the 1990s continued, and institutions continued to fail the Black British population.  Individuals cannot bring about racial harmony if institutions don’t support them–as Stephen Lawrence and his family found out. 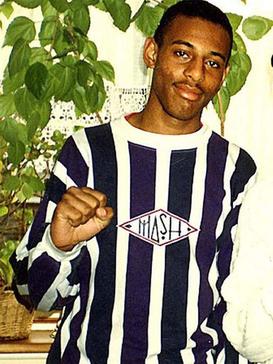 1 thought on “Mixed Messages: The Role of the Multiracial Character in Children’s Literature”